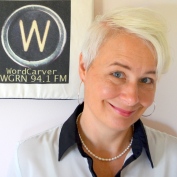 Writer for life. At the age of twenty I emigrated from Seattle to London, England, because I thought that was where all the writers lived. I knew one person: a young man I’d met at a bus stop. My American family was too poor to make transatlantic calls, and I had only £800 in my pocket, but I had moxie and hustle. In London I worked as a reporter (a job my first editor said was as easy as “putting your hand in a meat grinder”) and later segued into public relations. I wrote two books, Motherhunt (Headline UK) and Butterfly Eyes (Headline UK).  After 16 years in England, I returned to the US with my bus-stop lover and won the Ohio Writer’s Contest short story prize for “Salmon.”

My journalism, creative non-fiction, and short stories have been published in anthologies, online, and in print magazines. In 2014 I earned an MFA in Creative Writing from Antioch University, Los Angeles. In 2015 my third novel The LightCatcher won an Official Selection in the New Apple Book Awards.

Audio interests me, so I began Word Carver, a half-hour radio show and podcast showcasing authors, poets, and essayists, available on iTunes, in GooglePlay and Spotify. Last year I began blogging at Medium as Word Carver and Tweet about the podcasts and show guests @wordcarverradio, and @cynthiarosi and on Instagram @wordcarverpodcast.

When I’m not writing, I’m teaching at Capital University and Columbus State Community College as an Adjunct Instructor.

015, Nick White, How to Survive a Summer

Immigrant Stories, and a Home Song

My Father’s Closet, and Voices

Don’t Come Back, & Diary of the One Swelling Sea